El Rey Club Updates: A Roll of the Dice, a Big Fan (Dancer), and a Good Sign.

I hope you will excuse this long post, but it has been far too long since I've paid any quality attention to this blog, specifically any El Rey Club updates.

Some of the reasons for not adding more to the blog has been due to me finally tackling the chore of writing the book. I actually finished the first draft roughly around October/November of 2010. Since then there have been revisions, new drafts, and the tireless task of trying to find a literary agent and/or publisher. While I can't claim to be at my wit's end regarding my hopes to sell the book, I can say that it is TOUGH getting an agent to take a look at your work. I continue to push forward, I continue to revise as new information comes about, continue to find this book a home, and continue to add to the collection of memorabilia.

The section of this blog (and my El Rey blog) dealing with my collection is sorely out of date as well. This will be rectified whenever I get my scanner back up and running and when I have the time to do all the work. That being said, let's address how exciting the end of 2011/beginning of 2012 has been regarding new El Rey items and information. 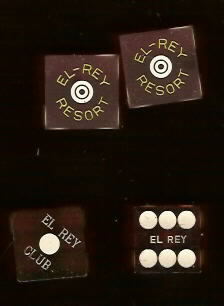 If you recall, I'm ALWAYS collecting items like dice, poker chips, advertising items and the like. Truthfully, ANYTHING that survived the years I try to get my hands on somehow and I've had tremendous luck over the years. Among the things I have been hoping to get a hold of are these rare dice, pictured on the right. I was told close to 7 years ago that these were not for sale. That was then.

Some time in 2011 I was able to secure the purchase of the single die on the lower left of the photo. The seller told me he was liquidating his collection and promised me he'd keep me posted if the others came up for sale.

Right after the ball fell and 2011 turned into 2012 I was able to purchase the others in this image at what can only be termed as "a fair price." I pride myself on buying items at a fair price whenever possible, especially in this economy. For me, if I have the money, I want the seller to know I'm honest and eager to preserve the history all while keeping him happy to let something go from his collection (it is harder to do than you think). Plus, I truly believe that for all of the times I don't haggle, even occasionally overpay for something, the karma and good faith comes back to me later on. There have been plenty of items I've received as gifts, as trades, or simply at a better price than others would have paid because of the devotion I've had to this project.

This kind of karma came around for a very special visit!

Right before the New Year began I received a phone call from Mike Madden of Searchlight, NV. He's a long-time resident of the area and his aunt owned the Kaye Motel in Searchlight. He's quite a character and a fixture in Searchlight with many friends and quite a collection of STUFF. By his own definition he is a big-time hoarder.

On the 29th of December he stumbled upon a rather fascinating item and remembered hearing about some random guy interested in all things El Rey Club. It didn't take him long at all to locate me.

He mentioned that he had quite a few copies of newspaper articles pertaining to the El Rey. He had donated the originals years earlier to the Searchlight Museum and thankfully, thought to keep copies for himself. 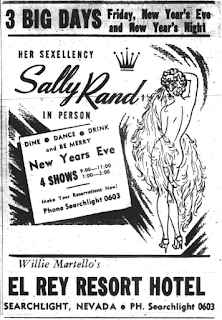 These articles featured some amazing things. Advertisements for the "Premier Performance" of Peggy DeCastro, stories advertising the filming of Jerry Schafer's Wide Open Spaces, a photo of the very first airplane to arrive at Willie's airport—quite a treasure trove of information that will surely add to the story, if not my workload.

He told me what he had found lying in the desert a few thousand feet from where the El Rey once stood and sent me some photos from his phone. The images really did not help give a better idea of what he had found but his description, along with the promise of "new" archival footage intrigued me enough to plan a visit to Searchlight.

We met at the Searchlight Nugget Casino where he presented me with an envelope with the aforementioned newspaper articles as well as the Sally Rand photo. Needless to say I was already giddy to be holding such a piece of history. It's cool enough to have a new piece of El Rey history in my hands, but something that in all likelihood Sally Rand herself touched? Super-geek moment for me.

He told me I was free to make copies of all the articles for my own collection, which certainly made me very happy. I was afraid to ask, but I told him if he ever felt he could part with the Sally Rand photo I'd be happy to pay a fair price. He smiled and pushed the photo next to me along with all the news clippings and said, "You just take that home with you."

My mind was blown! I insisted on paying him something for the image and he just shook his head and said, that's yours now. Indeed it is! Don't believe me? Here's a photo! 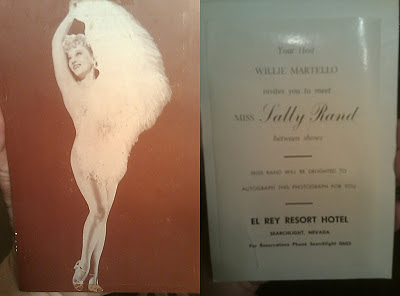 Apologies for the quality of the image.
My scanner is out for the moment.
Next it was time to see what he found in the desert. He said he had found a sign, he described it as a billboard, that had some advertising for the El Rey. He described it as pretty large, but I got the impression from the photos he sent that it may have been a Chamber of Commerce sign with many of the local businesses advertised. Regardless, I thought if there were some original advertising from the place that survived after baking in the desert all these years, I would surely want it!

We drove just down the road a spell and then made a very short walk into the desert. Truthfully, it was barely off the edge of the highway. There, face up on the ground, completely invisible from the road and something you'd only find if you happened to be walking past it, was a 12-foot long by 5-foot tall, hand-painted sheet metal sign, faded and sandblasted from nearly 60 years worth of desert weather. The billboard was framed nicely in dried redwood and what remained of the ground posts stuck out from the bottom. A quick glance gives you no reason at all to think anything of it (nor will my own photographs). Closer examination and you can CLEARLY read the block letters...

Of the items I've managed to get into my collection that clearly fall into the "this just shouldn't exist anymore" category, this has to be on the very top. It once stood alongside Hwy 95 as you headed north about 1500-2000 feet away from the El Rey, most probably since the 1950s. It was likely removed to make way for the MASSIVE BIG-TIME BILLBOARD nest to the Terrible's Casino and the McDonalds in Searchlight today. If I were a betting man, I'd wager that the sign was painted by Bob Martello himself.
What's remarkable about this sign, aside from the fact that it survived in the first place, was the relatively great condition it was in. Very little rust outside from the many nails and bolts holding the sign together. Some original paint and colors are visible. There are NO bullet holes, NO graffiti, nor any of the typical damage (aside from weather wear) you'd find in a small, remote town on an ancient, forgotten road sign. Quite possibly...the find of the century for me! 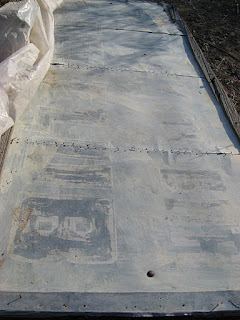 Mike was describing ways to get it free from its desert home and had even taken time to cover it in plastic so no further damage would happen. We both felt that even one more desert rain could tear away all the history.

I began asking if he wanted a finder's fee or some kind of payment for this great item. Let's face it, no matter how old you are, "Finder's KEEPERS!" can always come into play, especially in a mining town. He just smiled again and said, "How are you going to get this home?"

THAT is the kind of karma I'm talking about. I've done so much research, worked so hard to learn and preserve history, and spent the kind of money on "junk" that only people with silly hobbies can justify, and when it has mattered the most, great gestures of kindness and generosity come along to offset the effort and expense. These gifts have come from Willie's family, other collectors,interview subjects, and now from a guy I'd only met an hour previously. Just like that, I had not one, but two pieces of El Rey history that simply shouldn't have survived the years. The big payment that Mike accepted? One cold bottle of beer.

While the patina that comes from antiquity is very cool, I've decided one of my goals for the year is to get the sign fully restored. If all goes well, I'll get it on American Restoration and make it so it looks the way it did along that Nevada highway and hang it on my wall. Maybe even commission a miniature version that I can bring to shows and future book signings. Who knows?

So there's more than enough El Rey update to satisfy your curious soul. I still revise and expand upon the book while waiting for a YAY or NAY from a publisher that has stressed a serious interest in the book. I know I've had some amazing luck with this silly, remarkable hobby and believe me when I say I am truly grateful. I'm choosing not to look at this recent burst of El Rey-centric fun as mere luck, but quite literally, a good "sign" that this will be a great year.

While many of the El Rey posts have been temporarily removed from the blog to protect the upcoming book, you may still get caught up on a lot of the El Rey Club news by clicking HERE or HERE.

If YOU are a literary agent or publisher looking for a fascinating page-turner to release, or someone with information or artifacts relating to Willie Martello's El Rey Club, contact me immediately at 702-465-5604 or andy@andymartello.com

Thanks for supporting the El Rey Club Project.
Please leave your comment below.

The unreal, but TRUE story of the little casino that changed Las Vegas FOREVER!

The THIRTEEN-TIME award-winning book, by Andy Martello is out NOW!

The King of Casinos: Willie Martello and the El Rey Club has been sold in six different countries and has earned 13 awards, including an International Book Award, a USA Best Books award, a Readers' Favorite award, and it was named BOOK OF THE YEAR by the Casino Chip & Gaming Token Collectors Club.

To commemorate Nevada's 150th birthday, NewsReview.com named the book one of the essential 150 Things for 150 Years, a list of the best Nevada movies, songs, television shows, and books.

Check back for information about a major motion picture based upon this incredible book.

Andy continues to collect artifacts and stories from the El Rey Club. If you have any information to share or items for his collection, contact Andy Martello today!

Andy Martello, Comic Juggler & Plate Spinner
Call 702-465-5604 or Visit www.andymartello.com. Andy Martello is celebrating his 25th year as America's premier corporate entertainer. Andy has been seen on NBC's "Last Comic Standing", WGN's "The Bozo Show" and appeared in national television commercials. He has even performed for President George Bush (the original, NOT the sequel!)